Here’s the scoop on the surprising and not-so-surprising benefits I have gained from going to Studio Barre. (This post is sponsored by Studio Barre Grand Rapids. All opinions are my own.)

My Thoughts About Barre Before Trying Studio Barre…

I’ll be honest and say that I was not initially drawn to the concept of barre classes. As I kid, I tried gymnastics and ballet classes out…mostly just as an excuse to hang out with my BFF Meredith who was a natural at both. I, on the other hand, could not advance past the “beginner” gymnastics class and I think I might have been the worst student my ballet teacher ever had. Climbing trees with my brothers and playing soccer with our squad of neighborhood boys was much more my speed.

Because barre classes are taught in a dance-like studio and elements of ballet are involved, I was skeptical about this type of exercise. On the other hand, I was intrigued by the concept of a female-only studio and the small, tight-knit vibe of a fitness boutique studio appealed to me.

When Anna Chapman, owner of Studio Barre Grand Rapids, reached out and offered me the opportunity to try Studio Barre classes, I decided to give them a whirl.

Prior to beginning my Studio Barre membership, I had been working out sporadically at a local gym. My exercise routine was terribly inconsistent and I often found myself lacking any motivation to break a sweat during my workout. In full honesty, sometimes I would just slowly walk on the treadmill while watching Real Housewives episodes (#realtalk), so I was not experiencing any physical growth or changes.

Studio Barre is conveniently located in Breton Village (I just park near the Jos. A. Bank store and take the sidewalk behind there to get into Studio Barre). My initial impression of the studio was very positive–it is a beautiful, clean and bright space.

In the front of the studio, they have a storage unit and cozy chairs for getting ready before class. Studio Barre also has a little changing room and they keep their bathroom stocked with essentials like dry shampoo and spray deodorant, so you can quickly get ready and go back to work after taking a class. They also have a great selection of all the gear you might want or need–leggings, shirts, barre socks and water bottles are all available for purchase in the studio.

My favorite thing might be their letterboard though. The Studio Barre staff keeps it updated daily and the quotes always put a smile on my face.

My main goal with barre was to get into a consistent work out routine. I’m a person that can literally go months without exercising (eek!), so I wanted to get in the habit of working out several times a week.

I’ve been going to Studio Barre over the past 4 months and I’ve made it to 33 classes. My average is about 2 classes per week, which accounts for a couple weeks when I wasn’t able to make it in at all (due to a loss in our family and a week of sick kids). This is HUGE for me! I would say the goal to start working out more consistently has definitely been accomplished.

Besides getting into a consistent exercise routine, I have gained so much more through Studio Barre than I ever expected.

1 – I honestly had no idea how challenging barre classes would be. Studio Barre especially seems to push you because they keep your heart rate up with cardio bursts. Also, the instructors challenge you to push yourself physically and mentally in every class. At the same time, you can still do barre there even if you are not in great shape. If you’re like me, you can just modify things (like doing push-ups and planks on your knees). And you can always pause and take a quick breath if (when) your booty feels like it’s going to light up in flames. No one is judging you or paying close attention to what their neighbor is doing. Just focus on your own progress and you’ll be golden!

2 – Related to point #1…I had no idea how much Studio Barre classes would challenge my mental toughness. I have to mentally prepare for the classes because, like our instructors always say, your mind wants to give up way before your body needs to actually stop. And believe you, I “give up” often throughout the class, but I am growing in my mental toughness and learning to breathe through the difficulty even if that just means holding a difficult pose a few seconds longer.

3 – You will burn A LOT of calories at Studio Barre even though it’s not a cardio class. There are moments in the class where we slow down to stretch, but mostly these barre classes are high energy and will get your muscles to burn! The class moves you through different positions to target muscle groups to the point of fatigue. I have never so effectively burned my seat (booty) muscles or hip and thigh muscles as I have at Studio Barre! Plus, the great thing is you keep burning calories even after the class is over because of the muscle fatigue and the cardio bursts.

4 – There is a true sense of community at Studio Barre. Like anything in life, you have to actually make your own effort to get to know people and start up conversations…but I have found everyone to be so friendly that I have talked to at Studio Barre. I’ve made some new friendships through the community there and it’s just fun to get to know the people you are working out with. I also love how the staff makes a concerted effort to get to know your name. Even when I was brand new there, the instructors would use my name during the class, which really impressed me.

Also, the child care workers (shout out to Miss Robin!) always make Adler feel right at home when he comes along with me to barre. I did not expect Adler to be begging me to take him to Studio Barre throughout the week!

Studio Barre has given me a promo code to share with you all, so you can try one week FREE at Studio Barre!

Click this link here and use the promo code HONESTMOM to get your first week free. (This offer is valid for NEW clients located in the Grand Rapids area. The offer must be redeemed by January 3, 2019 and your free week will activate once you come to your first class. You will have until January 31, 2019 to activate the one free week.) 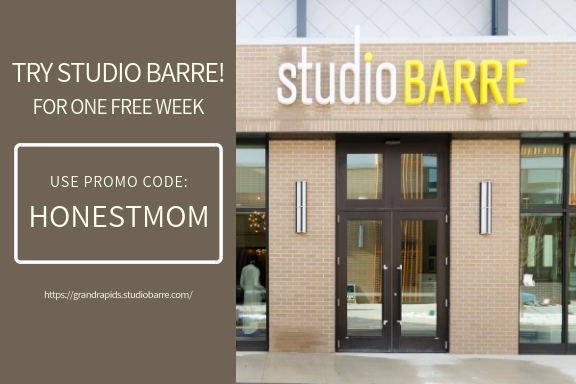 As you gear up for a healthy 2019, come join me at Studio Barre Grand Rapids. I LOVE having workout buddies and can’t wait for you to experience all the benefits of (Studio) barre like I have!

This site uses Akismet to reduce spam. Learn how your comment data is processed.